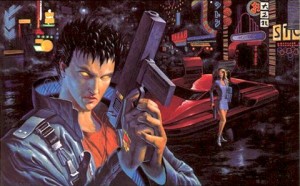 oh 80s cyberpunk, you will always have a place in my heart

Synopsis: Science fiction is an under appreciated genre in role playing games. Fantasy (Dungeons and Dragons) and horror (World of Darkness) dominate RPGs and most of the popular sci-fi games out there aren’t really science fiction or are horribly anachronistic. Tom and I discuss the state of science fiction and how it is different than fantasy or horror. As the literature of ideas, sci-fi should play differently than other genres. Everything from thematic content to the design of the game should be affected. We also have a letter from Tom, shout outs, an anecdote and reader letters.

15 comments for “RPPR Episode 58: The Games of Tomorrow”