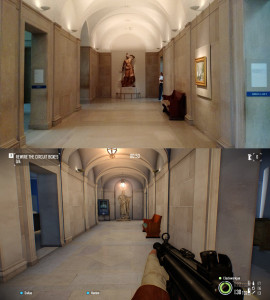 News: The Fan Creation page on RPPR Actual Play is online. The handouts for Boiling Point are available for download if you need to print them out. Red Markets is in alpha playtesting and you can help. Read this thread for more info.

Synopsis: At a certain point, most gamers will start looking at places they visit or learn about and daydream about what kind of game could be set in that place. Caleb and I discuss how we look at spaces we learn about and incorporate them into games. From our regular haunts to places we only read about, there are many ways to look at interesting places and integrate them into a game. It happens in video games all the time – this picture shows the Freer Gallery of Art vs the Diamond Heist in Payday 2. Tom is not in this episode, so no letter, but we do have shout outs and anecdotes.