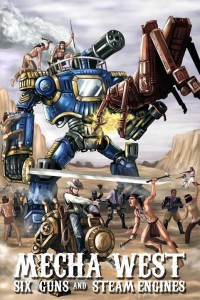 Ask anyone, from the lowliest farmhand in Missouri to the wealthiest banker in New England who they consider to be the most important figure in history, chances are they’ll give the same answer: Robert Fulton. By his simple act of installing steam engines into antiquated clockwork armors from the Napoleonic Wars, he changed the face warfare forever. Armed with massive Colt repeaters, these mechanical behemoths were the premier soldiers of the American Civil War, with both North and South creating untold devastation that fractured the nascent United States by wars end.

Now a more dangerous Wild West has risen from the ashes of Reconstruction. Iron Rangers from the US Calvary clash with Comanche Iron Killers. Cattle rustlers conduct midnight raids in rickety Turkey Walkers and groups like the Chinese Freeman Society and New Africa fight to hold claim to their new territories. This is the world of Mecha West.

Mecha West is a standalone game setting utilizing the MECHA RPG system. Written by Chris C. Carter and Edward M. Edelac, the game presents an alternate history look at Post-Reconstruction America where Steampunk Mechs are the staple weapons for lawmen and wandering gunmen alike. Aaron interviewed Chris and Eric about the setting and what influences they took from the real history of the Wild West. Mecha West is currently running a Kickstarter, so if you like Steampunk warfare, give them a look. If you also interested in running MECHA games, their current games are available for purchase on DrivethruRPG.

2016-02-05
Previous Post: The Art of the Table: GMing Beyond the Basics at PAX South 2016
Next Post: Patreon Preview: WoD The Heck – Dirty Secrets of the Black Hand