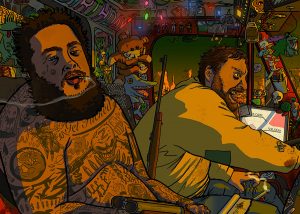 Synopsis: After the text is written and the art is drawn, the book still needs to be prepared for printing. Guess what? It’s not exactly an easy process to master. Caleb has valiantly thrown himself into it though and we can all learn from his struggles. Learn about covers, book binding, paper weight, and everything else you always wanted to know about book printing but were afraid to ask.

Song: When the Livin’ Ain’t Easy by Somewhere Off Jazz Street