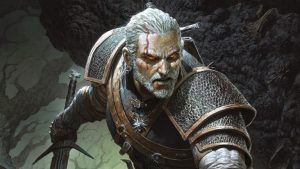 News: We have created a new reward for RPPR patrons – extended early access! Get actual plays and panels recorded at Gen Con 2018 a month early! The first AP, Dagashi OVA Season 1, run by Bridget, is available now on the RPPR Patreon!

Synopsis: The new Witcher tabletop RPG is out and we have looked it over. I discuss the RPG with Birk, a new RPPR cast member, to discuss the game and licensed games in general. We also have shout outs and an anecdote