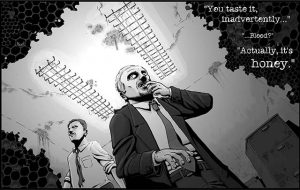 Caleb has restarted work on Slingstone, his superhero-slaying RPG. We have some playtests of the first version of Slingstone on RPPR B-Sides volume 5 if you want to hear that. I have an idea for a zine system-free version of Night Clerk, one of our more popular AP episodes. We also talk about creativity in the age of Covid-19.