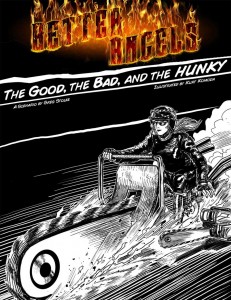 Caleb recorded a panel discussion  at Gencon 2013 about Arc Dream’s One Roll Engine games, from Godlike to Better Angels, led by Shane Ivey. Find out what’s going with the system and how it came to be.

Synopsis: In this episode, we bring in Aaron and David to discuss their experiences at Gencon 2011. Aaron ran three sessions of a Monsters and Other Childish Things game based on the Secrets of NIMH while this was David’s first Gencon. David cosplayed as an anime character, so he had a different experience. We also go over our purchases at Gencon and share more anecdotes from con games.

The Life and Adventures of Santa Claus is a delightful story by L. Frank Baum with an intriguing mythos. Rankin-Bass produced a claymation adaptation, which is where Katie and Jonny first discovered it. There have been a few other incarnations as well, including a Japanese anime.

Jonny always thought it would serve pretty well as a fantasy RPG setting, so when Katie suggested a one-shot game based on it, he heartily agreed. There will be two “adventuring parties” if you will- the immortals of the forest of Burzee, and the children of the laughing valley of Hohaho. Katie will act as a storyteller for the children, and Jonny for the immortals. The two groups will have separate adventures leading up to a unified finale. We will have pre-generated characters. We’ll be using the Reign system, which is based on the One-Roll Engine.

(Note from Ross: I was a player in this game but I forgot the names of all of the players. If you were there, post in the comments and I’ll update it.)