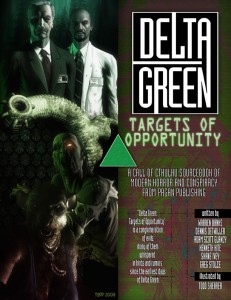 Adam Scott Glancy is one of the co-authors of Delta Green and is the man behind Pagan Publishing. I talked to him over Skype about the newest Delta Green book, Targets of Opportunity, a collection of new DG antagonist groups and M-EPIC, a Canadian anti-mythos organization.  We also talk about the resurrection of The Unspeakable Oath, the legendary Call of Cthulhu magazine, a scenario about templar zombies and their mastery of the Dewey Decimal system and advice for running Call of Cthulhu for new keepers. This is a long interview but well worth the listen.

A group of prisoners has been shipped to a remote laboratory in Nazi Germany during the final days of World War 2. But when they arrive, their guards disappear and they are left to their own devices. The lab is deep within the wilderness and a raging snowstorm makes escape on foot impossible. What happened to the lab’s personnel and what is still inside? Find out in Tom’s second playtest of Divine Fire, a WW2 Call of Cthulhu scenario.