Watch Zombies of the World episode 1: Migration and learn how it was made on the ZOTW blog.

If you want to contribute art for the Lemurian Ruins – email rpprpodcast@gmail.com.

Synopsis: Game balance is a tricky thing. While in some cases, it’s easy to spot an unbalanced system like Palladium or Synnibarr but other times, a game’s imbalances won’t be revealed until you’ve played it for a while. So what do you when you find out that the game you’re playing is unbalanced? We discuss how to deal with these situations. It’s possible to change systems, house rule it so that it’s balanced or use the social contract to keep things fair. Also instead of a letter, Tom talks about having a cyst cut out of him. It’s really gross (NSFW link do not click this)

Music: Our Life Our Rules by Moral Decline 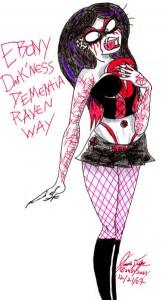 My Immortal is one of the most infamous fanfictions on the Internet. Cody reads the first four chapters, the opening of a goffik epic.  I can’t really add on to that. Prepare for the darkest, most dramatic saga of this generation. Or not.

A year has passed since the destruction of the thieves’ guild. The Water Barons now control Border Town, the second settlement of the colonial government. With their new power comes new challenges and new allies. A dragonborn sorcerer joins their ranks, played by Bill. What else happens? You need to listen to find out.

The New World Campaign has continued on the RPPR Actual Play Podcast. Get a complete episode listing here.

You can check out episode 14 here.