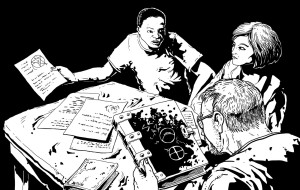 News: There’s a new benefit for RPPR Patreon backers. I’ll be at Comicpalooza from May 22 to 25 at booth 1912. I’ll also be running two demos of Base Raiders there. Boiling Point should be released in June.

Synopsis: Silent Legions is a new horror RPG that emphasizes creating your own mythos of evil gods, cultists, monsters, and artifacts. After all, we’re all fans of the Cthulhu mythos, but once you’ve seen one invisible blood sucking monster, you’ve seen all the star vampires. Caleb and I rolled up a bunch of random creations using Silent Legions and discuss how they would work in an actual game. We also discuss Silent Legions as a game. Plus there’s shout outs and anecdotes!