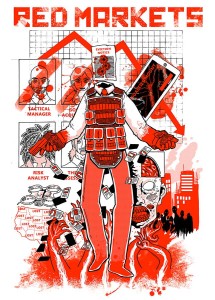 Even though Fallout 4 is out, Caleb is still hard at work on Red Markets. Playtest feedback is trickling in, so the next step is deciding how to change the game based on this feedback. Some changes will be easier than others, but not every bit of feedback will be used to make these changes. After all, not all feedback is equal. Giving and receiving feedback is a crucial skill for a game designer, yet it is often an undeveloped skill. Fred Hicks about his experiences at Metatopia about feedback skills and is mentioned during out discussion.

Even after receiving valuable feedback, changing the game will not be easy. Caleb discusses some of the changes he is considering and I provide some analysis of Red Markets in its current state.

Music: Footbeats by Admiral of the Red.

2015-11-17
Previous Post: Interview with Kenneth Hite on the Dracula Dossier
Next Post: RPPR Episode 122: It Takes a Village to Carry My Inventory