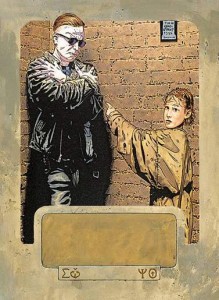 Synopsis: In this episode, we bring in Aaron and David to discuss their experiences at Gencon 2011. Aaron ran three sessions of a Monsters and Other Childish Things game based on the Secrets of NIMH while this was David’s first Gencon. David cosplayed as an anime character, so he had a different experience. We also go over our purchases at Gencon and share more anecdotes from con games.

My campaign for Monsters and Other Childish Things, Road Trip is available for pre-order! Buy it here!

The Codex of War is out! Download it here.
If you like our AP episodes, donate to the ‘Get Aaron to Gencon’ Kickstarter to get early access to 5 AP episodes.

The real world holds just as much adventure as any fantasy or sci-fi setting. In this episode, Tom and I discuss various types of games you could run based in the real world with normal PCs (with no extraordinary abilities or cinematic fighting skills). There are more possibilities than you might realize.

Music: Anything 4 Adventure by the Jim Morey Band.

If a real world campaign interests you, check out the following resources below the fold.