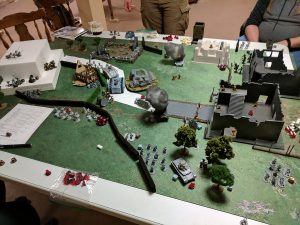 We are trying something new here at RPPR! Over the last year, Aaron, Jason, Renee, and I have gotten into a miniatures war game, Konflikt 47. It’s a Weird World War 2 setting, with robots, werewolves, zombies, and teleporting ninjas (kind of). We’ve played multiple games, but I thought it would be an interesting experiment to podcast a full game. So for every turn, every player talked about their armies and their decisions, as well as a pre and post-game commentary. I took some photos to help illustrate what was happening. Keep in mind we played using proxy miniatures for several units AND we have not painted many of the miniatures. If you like this, please let us know and we will record more in the future.

Pics below the fold! 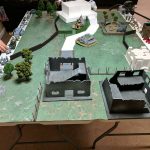 Behold Zakopane! The Axis forces approach from the West (left) while the Allies attempt their extraction from the East (Right). 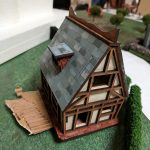 Inside his idyllic cottage, Jakub Nowaski awaits his freedom from Soviet conscription. But who will be knocking on his door offering freedom? And will it actually matter in the end? 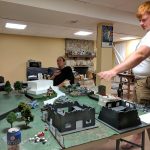 The Marines have landed, and the situation is well in hand! An early game push by a squad of Marine Raiders forces the Axis players to rethink the security of their flank. Meanwhile, the Brits are sitting this one out (models on the RH table edge) 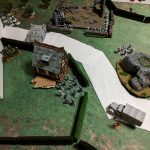 Zombies! End of Turn 1 sees the stage setting for a nasty brawl over the HVT (High Value Target) 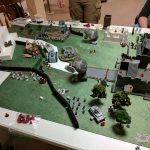 End of Turn 2 and all Hell has broken loose! While the Axis players divide their focus between protecting their extraction route and the target, the Allies force contests across the board. (Giant dice represent incoming artillery strikes) 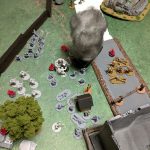 End of Turn 3 has seen the upperhand swing to the Axis forces. The HVT is not only in their control, but surrounded by a swarm of Nachtjaegers (Vampires). However, a squad of Marine Raiders holds court in the streets in a desperate bid to save the match. 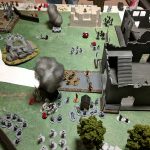 Allied forces press hard from behind the Factory Complex, attempting to pin the Axis forces in place until enough reinforcements arrive to contest the HVT. 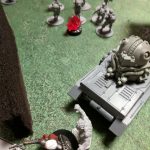 Victory! Jakub Nowaski is now safely in the hands of Axis forces, ready to reveal the Russians latest Rift-tech marvels. . . all of which are knockoffs of stolen Axis tech. C’est la vie.