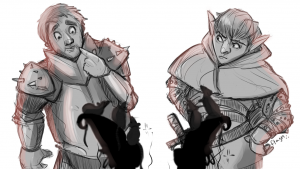 News:I will be at Patrecon next weekend to learn how to improve the RPPR Patreon! It should be interesting and I will report back in the next episode. Caleb and Spencer are heading to Metatopia to playtest their new game Party Fowl. Check out photos of it on Facebook. Don’t forget about the Gobblin’ Kickstarter!

Synopsis: As you may know, Caleb and I have another podcast called the Mixed Six, along with another co-host, Spencer. He’s a huge board game player but had never played a tabletop RPG before until Caleb and I introduced him. We have been recording an ongoing series for the Mixed Six Patreon called Snippets of Adventure. We will make the first season available to Youtube and the first two episodes are already online. In this episode Caleb, Spencer, and I discuss the series and Spencer’s experiences as a new RPG player. Plus, shout outs and anecdotes, as usual!

Song: The Price of Valour by Kai Engel