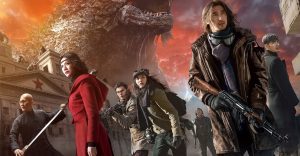 This is our newest RPPR Patreon bonus podcast series, Don’t Cross the Stream! In each episode, cast members like Caleb, Bridget, and Thad review and break down a title currently available streaming on Netflix. We then figure out how gameify it – either by creating new mechanics or random tables or creating entirely new mini-games. We also write up one of our ideas into a PDF you can use!  If you like it, please back the RPPR Patreon to access all of the episodes and PDFs today!

Chronicles of the Ghostly Tribe is a weird movie. It is ostensibly a Chinese summer blockbuster sci-fi action movie, but it’s more like 3 or 4 movies in one. There’s aliens, kaiju, the Chinese Red Army’s secret archeological unit, an Elvis impersonator who sings about Genghis Khan, dramatic shifts in tone, and undead werewolves (I think).Bridget, Caleb, Fae, Thad, and I all watched the movie and analyzed it for the show. We also figure out how to turn this mess into a playable game. Up next is a playable mini-game by Bridget! 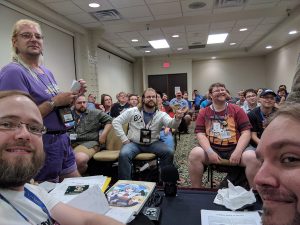 We met a lot of fans of RPPR at this year’s meetup and here’s the recording! We talk a little about RPPR, answer questions, have some trivia contests for listeners, and of course dissect an…interesting RPG, Maid. Enjoy! 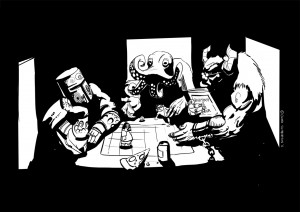 Synopsis: We’ve talked a lot about campaign structure in the past but in this episode we discuss a new way to think about your campaigns. Namely, how to make a character-focused campaign as opposed to a sandbox or central plot focused game. We use long standing TV series to illustrate the differences and use our own personal experiences to provide helpful advice about it. We also have special guest, Thad from the AP podcast, show up. No letter from Tom, but we do have three letters from listeners and shout outs!