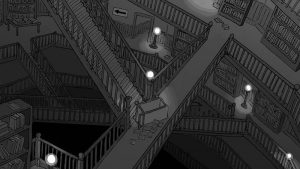 News: Back the RPPR Patreon for $10 to receive an enamel pin with our new logo. Check this post for details!

Synopsis: Shaun has started working on a new storytelling game called Derail. It’s about subverting cliches and tropes in movies and video games. We talk about his new game and his first two playtests. I’ve actually playtested Ruin twice and I talk about my progress with the game. Caleb has several game design projects he is working on, so he talks about them as well.