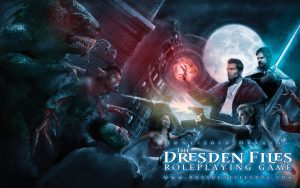 We finished season 1 of Dan’s Dresden Files campaign so it’s time to talk about how it went. This campaign was unique because Dan managed to wrangle two separate groups of players into a single plot line that escalated as the game progressed. We talk about how that worked and what we thought about the Dresden Files RPG game mechanics. If you want to learn more about running Fate system games or the Dresden Files as a setting, check this episode out!

If you missed any of the episodes, use our campaign page to find all of Season 1’s episodes.