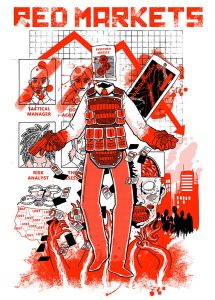 News: Check out the Red Markets campaign page. All of the episodes of the campaign are linked for easy access.

Synopsis: The first Red Markets campaign is done, so we had to talk about it. Caleb, Aaron, Tom, David, and I talk about the concept for the campaign, how we came up with our characters, and what worked and didn’t work. Find out what rules changed in the game as a result of this campaign, what was unexpected and what our favorite moments were. It was a fun and lengthy discussion, so no shout outs or anything else with this episode. See you at Gen Con!